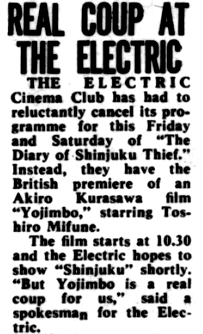 REAL COUP AT THE ELECTRIC

THE ELECTRIC Cinema Club has had to reluctantly cancel its programme for this Friday and Saturday of “The Diary of Shinjuku Thief.” Instead, they have the British premiere of an Akiro Kurasawa* film “Yojimbo,” starring Toshiro Mifune. The film starts at 10.30 and the Electric hopes to show “Shinjuku” shortly. “But Yojimbo is a real coup for us,” said a spokesman for the Electric.