Mr. Russell Ward, one of the Electric’s projectionists, with the new equipment, originally presented to Winston Churchill by 20th Century Fox for use at Chartwell. 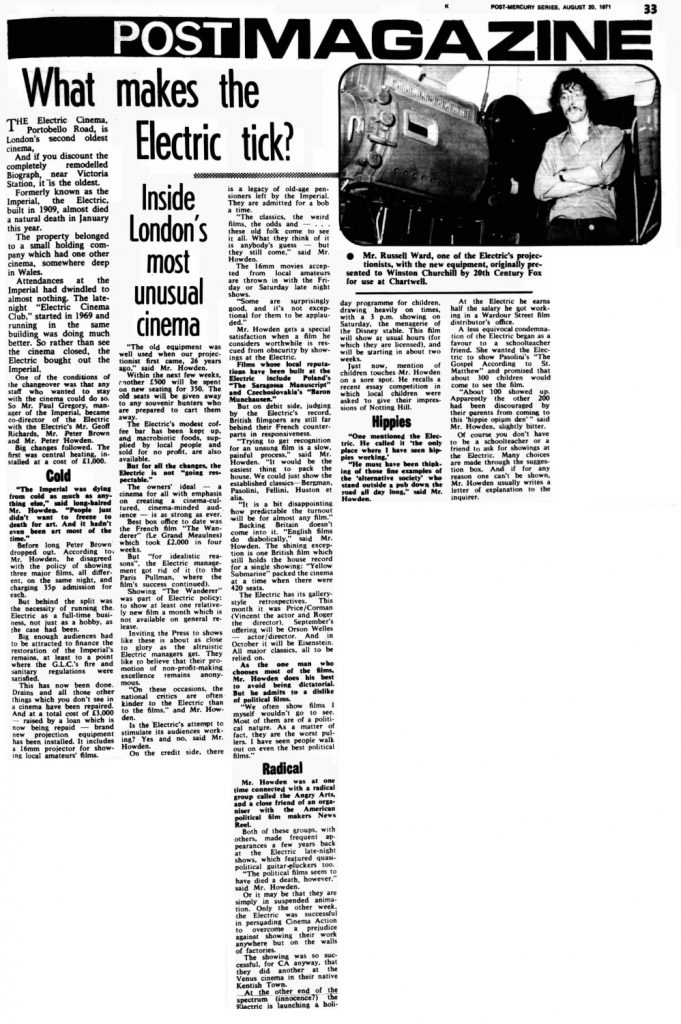 Inside London’s Most Unusual Cinema

And if you discount the completely remodelled Biograph, near Victoria Station, it is the oldest.

Formerly known as the Imperial, the Electric, built in 1909, almost died a natural death in January this year.

The property belonged to a small holding company which had one other cinema, somewhere deep in Wales.

Attendances at the Imperial had dwindled to almost nothing. The latenight “Electric Cinema Club,” started in 1969 and running in the same building was doing much better. So rather than see the cinema closed, the Electric bought out the Imperial.

One of the conditions of the changeover was that any staff who wanted to stay with the cinema could do so. So Mr. Paul Gregory, manager of the Imperial, became co-director of the Electric with the Electric’s Mr. Geoff Richards, Mr. Peter Brown and Mr. Peter Howden. Big changes followed. The first was central heating, installed at a cost of £1,OOO.

“The Imperial was dying from cold as much as anything else,” said long-haired Mr. Howden. “People just didn’t want to freeze to death for art. And it hadn’t even been art most of the time.”

Before long Peter Brown dropped out. According to Mr. Howden, he disagreed with the policy of showing three major films, all different, on the same night, and charging 35p admission for each.

But behind the split was the necessity of running the Electric as a full-time business, not just as a hobby, as the case had been.

Big enough audiences had to be attracted to finance the restoration of the Imperial’s remains, at least to a point where the G.L.C.’s fire and sanitary regulations were satisfied.

This has now been done. Drains and all those other things which you don’t see in a cinema have been repaired. And at a total cost of £3,000 – raised by a loan which is now being repaid – brand new projection equipment has been installed. It includes a 16mm projector for showing local amateurs’ films.

“The old equipment was well used when our projectionist first came, 26 years ago.” said Mr. Howden.

Within the next few weeks, another £5OO will be spent on new seating for 350. The old seats will be given away to any souvenir hunters who are prepared to cart them away.

The Electric’s modest coffee bar has been kept up, and macrobiotic foods, supplied by local people and sold for no profit, are also available.

But for all the changes, the Electric is not “going respectable.”

The owners’ ideal – a cinema for all with emphasis on creating a cinema-cultured, cinema-minded audience – is as strong as ever.

Best box office to date was the French film “The Wanderer” (Le Grand Meaulnes) which took £2,000 in four weeks.

But “for idealistic reasons”, the Electric management got rid of it (to the Paris Pullman, where the film’s success continued).

Showing “The Wanderer” was part of Electric policy: to show at least one relatively new film a month which is not available on general release.

Inviting the Press to shows like these is about as close to glory as the altruistic Electric managers get. They like to believe that their promotion of non-profit-making excellence remains anonymous.

“On these occasions, the national critics are often kinder to the Electric than to the films,” and Mr. Howden.

Is the Electric’s attempt to stimulate its audiences working? Yes and no, said Mr. Howden. On the credit side, there is a legacy of old-age pensioners left by the Imperial. They are admitted for a bob a time.

The 16mm movies accepted from local amateurs are thrown in with the Friday or Saturday late night shows.

“Some are surprisingly good, and it’s not exceptional for them to be applauded.”

Mr. Howden gets a special satisfaction when a film he considers worthwhile is rescued from obscurity by showings at the Electric.

Films whose local reputations have been built at the Electric include Poland’s “The Saragossa Manuscript” and Czechoslovakia’s “Baron Munchausen.”

But on debit side, judging by the Electric’s record, British filmgoers are still far behind their French counterparts in responsiveness.

“Trying to get recognition for an unsung film is a slow, painful process,” said Mr. Howden. “It would be the easiest thing to pack the house. We could just show the established classics – Bergman, Pasolini, Fellini, Huston et alia.”

“It is a bit disappointing how predictable the turnout (will be for almost any film.”

Backing Britain doesn’t come into it. “English films do diabolically,” said Mr. Howden. The shining exception is one British film which still holds the house record for a single showing: “Yellow Submarine” packed the cinema at a time when there were 420 seats.

The Electric has its gallery-style retrospectives. This month it was Price/Corman (Vincent the actor and Roger the director). September’s offering will be Orson Welles – actor/director. And in October it will be Eisenstein. All major classics, all to be relied on.

As the one man who chooses most of the films, Mr. Howden does his best to avoid being dictatorial. But he admits to a dislike of political films.

“We often show films I myself wouldn’t go to see. Most of them are of a political nature. As a matter of fact, they are the worst pullers. I have seen people walk out on even the best political films.”

Mr. Howden was at one time connected with a radical group called the Angry Arts, and a close friend of an organiser with the American political film makers News Reel.

Both of these groups, with others, made frequent appearances a few years back at the Electric late-night shows, which featured quasipolitical guitar pluckers too. “The political films seem to have died a death, however,” said Mr. Howden.

Or it may be that they are simply in suspended animation. Only the other week, the Electric was successful in persuading Cinema Action to overcome a prejudice against showing their work anywhere but on the walls of factories. The showing was so successful, for CA anyway. that they did another at the Venus cinema in their native Kentish Town. At the other end of the spectrum (innocence?) the Electric is launching a holiday programme for children. drawing heavily on times, with a 3 p.m. showing on Saturday, the menagerie of the Disney stable. This film will show at usual hours (for which they arc licensed), and will be starting in about two weeks.

Just now, mention of children touches Mr. Howden on a sore spot. He recalls a recent essay competition in which local children were asked to give their impressions of Notting Hill.

“One mentioned the Electric. He called it ‘the only place where I have seen hippies working.’ “He must have been thinking of those fine examples of the ‘alternative society’ who stand outside a pub down the road all day long,” said Mr. Howden.

At the Electric he earns half the salary he got working in a Wardour Street film distributor’s office.

A less equivocal condemnation of the Electric began as a favour to a schoolteacher friend. She wanted the Electric to show Pasolini’s “The Gospel According to St. Matthew” and promised that about 300 children would come to see the film. “About lOO showed up. Apparently the other 200 had been discouraged by their parents from coming to this ‘hippie opium den'” said Mr. Howden, slightly bitter.

Of course you don’t have to be a schoolteacher or a friend to ask for showings at the Electric. Many choices are made through the suggestion box. And if for any reason one can’t be shown, Mr. Howden usually writes a letter of explanation to the inquirer.