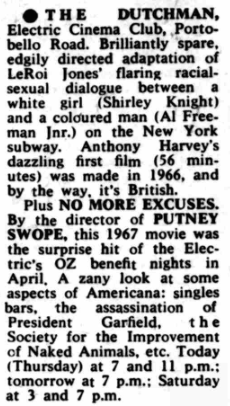 Plus NO MORE EXCUSES. By the director of PUTNEY SWOPE, this 1967 movie was the surprise hit of the Electric’s OZ benefit nights in April. A zany look at some aspects of Americana: singles bars, the assassination of President Garfield, the Society for the Improvement of Naked Animals, etc. Today (Thursday) at 7 and 11 p.m.: tomorrow at 7 p.m.: Saturday at 3 and 7 p.m. 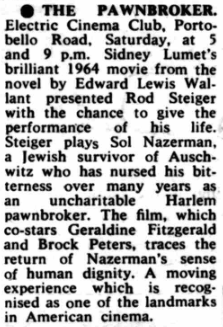 THE PAWNBROKER. Electric Cinema Club, Portohello Road, Saturday, at 5 and 9 p.m. Sidney Lumet’s brilliant 1964 movie from the novel by Edward Lewis Wallant presented Rod Steiger with the chance to give the performance of his life. Steiger plays Sol Nazerman, a Jewish survivor of Auschwitz who has nursed his bitterness over many years as an uncharitable Harlem pawnbroker. The film, which co-stars Geraldine Fitzgerald and Brock Peters, traces the return of Nazerman’s sense of human dignity. A moving experience which is recognised as one of the landmarks in American cinema.

THE STRANGER. Electric Cinema Club, Portobello Road, Sunday at 5 and 9 p.m., Monday at 7 p.m., Tuesday at 9 p.m., Wednesday at 7 and 11 p.m. Luichino Visconti’s film from the novel by Albert Camus was described as “a thin, sharp tale which stabs exactly and deeply into the moral nerve points of a century which is emptily agnostic but still not emancipated.” The Franco-Italian production, 1967, is acutely attuned to switches of impulse and mood and transposes them brilliantly into visual terms. With Marcello Mastroianni and Anna Karina.