* LOUISE MALLE’S Calcutta – The French film maker’s harrowing account of poverty in India which was well received at the Cannes Festival last year — is being screened at the Electric Cinema Club, Portobello Road, tomorrow (Friday) and Saturday at 10.30 p.m.

The 97 minute documentary in colour has been called Malle’s most personal film. It is a pictoral diary without script of his Indian trip.

Completing the late night programme is Popdown, a social satire told against a background of modern day society, using space characters to illustrate the decadence of the environment. The movie has special interest for pop fans — Zoot Money heads the case and there are appearances by bossa nova Luis Bonfa, Don Patridge, Brian Auger and Julie Driscoll.

* A man dying of cancer and his changing attitude to living forms the main part of Kurosawa’s Living – Electric Cinema Club, this Saturday.

Peter Prentice’s quest to find Fred Marshall’s 1968 film ‘Popdown’ (yielding about 15 minutes of footage from a film library in Hong Kong, and timecoded images which you can see here) has become a near-legendary tale of film detective work to recover imagery of psychedelic London.

Described by Monthly Film Bulletin on its eventual release in 1970 as a “fragmentary and undisciplined pop-culture collage, intermittently lively but consistently over-indulgent”, ‘Popdown’ is a dialogue-free tour of Swinging London of 1968’s near-future, seen through the eyes of visiting extra-terrestrials Zoot Money (Sagittarius) and Jane Bates (Aries). It was shot in the same year as Kubrick’s ‘2001: A Space Odyssey‘. Bowie’s ‘Space Oddity‘ was released the following year. The film is scored by Brian Auger & The Trinity and features Julie Driscoll and numerous bands signed to the Marmalade label including Blossom Toes, Dantalian’s Chariot and the Idle Race. (Julie Driscoll and Brian Auger & The Trinity, best known for ‘This Wheels On Fire‘, are familiar to fans of obscure psychedelia for their role in brainwashing the Monkees in the “TV version of ‘Head'” ‘33⅓ Revolutions per Monkee‘.) 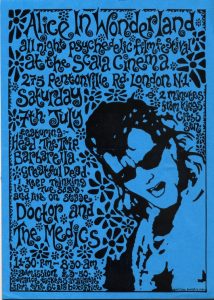 The screening of Popdown at the Electric Film Club in that most Sixties of years, 1970, was a kind of alignment of the planets that wouldn’t be repeated till it was screened on 7th July 1984 – when Prentiss first saw it and took a personal tape recording of the soundtrack – at the Alice In Wonderland All Night Psychedelic Film Festival held at the Scala film club at Kings Cross, which included Popdown, Wonderwall, The Trip, Head, Barbarella, and a live appearance by Doctor and the Medics. Then the trail goes cold. How does a movie go to the big film festival in the sky when it was on at the Scala in 1984? All of which goes to shows how fragile films are…