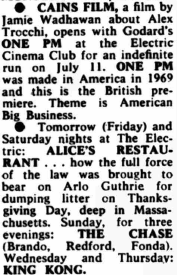 * CAINS FILM, a film by Jamie Wadhawan about Alex Trocchi, opens with Godard’s ONE PM at the Electric Cinema Club for an indefinite run on July 11. ONE PM was made in America in 1969 and this is the British premiere. Theme is American Big Business.

* Tomorrow (Friday) and Saturday nights at The Electric: ALICE’S RESTAURANT… how the full force of the law was brought to bear on Arlo Guthrie for dumping litter on Thanksgiving Day, deep in Massachusetts. Sunday, for three evenings: THE CHASE (Brando, Redford, Fonda). Wednesday and Thursday: KING KONG.