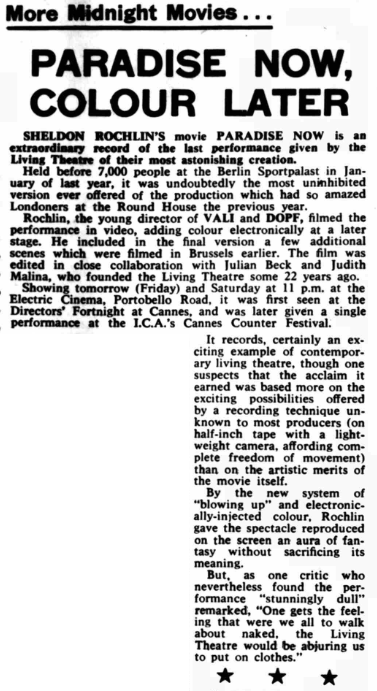 SHELDON ROCHLIN’S movie PARADISE NOW is an extraordinary record of the last performance given by the Living Theatre of their most astonishing creation.

Held before 7,000 people at the Berlin Sportpalast in January of last year, it was undoubtedly the most uninhibited version ever offered of the production which had so amazed Londoners at the Round House the previous year.

Rochlin, the young director of VALI and DOPF, filmed the performance in video, adding colour electronically at a later stage. He included in the final version a few additional scenes which were filmed in Brussels earlier. The film was edited in close collaboration with Julian Beck and Judith Malina, who founded the Living Theatre some 22 years ago.

Showing tomorrow (Friday) and Saturday at 11 p.m. at the Electric Cinema, Portobello Road, it was first seen at the Director’s Fortnight at Cannes, and was later given a single performance at the I.C.A.’s Cannes Counter Festival. It records, certainly an exciting example of contemporary living theatre, though one suspects that the acclaim it earned was based more on the exciting possibilities offered by a recording technique unknown to most producers (on half-inch tape with a light-weight camera, affording complete freedom of movement) than on the artistic merits of the movie itself. By the new system of “blowing up” and electronically-injected colour, Rochlin gave the spectacle reproduced on the screen an aura of fantasy without sacrificing its meaning. But, as one critic who nevertheless found the performance “stunningly dull” remarked, “One gets the feeling that were we all to walk about naked, the Living Theatre would be abjuring us to put on clothes.”