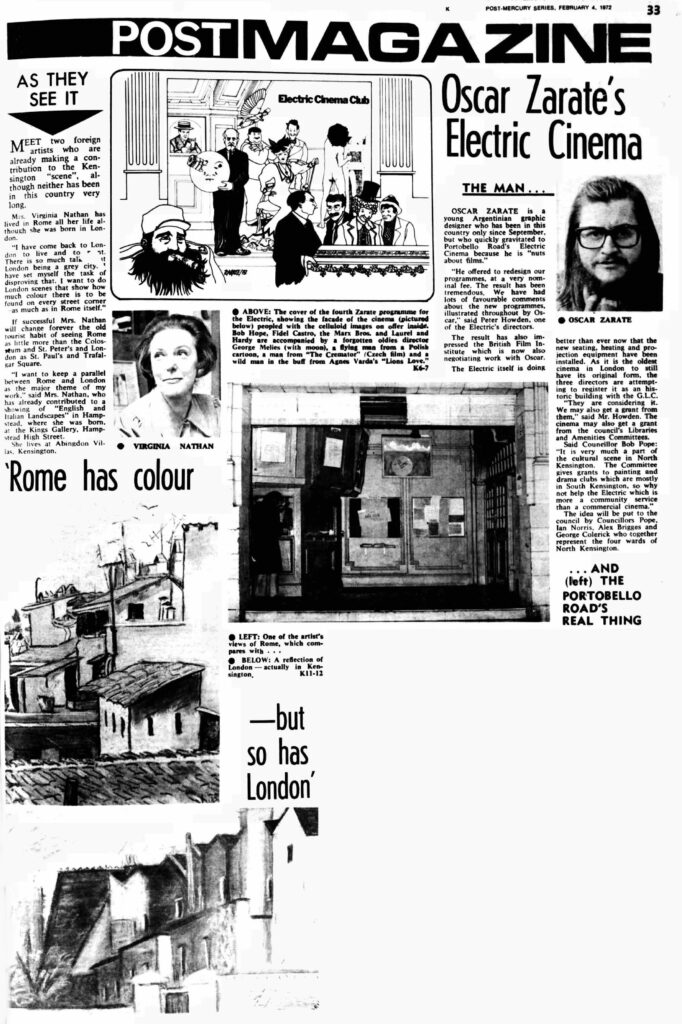 OSCAR ZARATE is a young Argentinian graphic designer who has been in this country only since September, but who quickly gravitated to Portobello Road’s Electric Cinema because he is “nuts about films.”

“He offered to redesign our programmes, at a very nominal fee. The result has been tremendous. We have had lots of favourable comments about the new programmes, illustrated throughout by Oscar,” said Peter Howden, one of the Electric’s directors.

The result has also impressed the British Film Institute which is now also negotiating work with Oscar.

The Electric itself is doing better than ever now that the new seating, heating and projection equipment have been installed. As it is the oldest cinema in London to still have its original form, the three directors are attempting to register it as an historic building with the G.L.C.

Said Councillor Bob Pope: “It is very much a part of the cultural scene in North Kensington. The Committee gives grants to painting and drama clubs which are mostly in South Kensington, so why not help the Electric which is more a community service than a commercial cinema.”

The idea will be put to the council by Councillors Pope, lan Norris. Alex Brigges and George Colerick who together represent the four wards of North Kensington.

[Caption] ABOVE The cover of the fourth Zarate programme for the Electric, showing the facade of the cinema (pictured below) peopled with the celluloid images on offer inside. Bob Hope, Fidel Castro, the Marx Bros. and Laurel and Hardy are accompanied by a forgotten oldies director George Melies (with moon), a flying man from a Polish cartoon, a man from “The Cremator” (Czech film) and a wild man in the buff from Agnes Varda’s “Lions Love.”