DURING September, the Electric Cinema Club, Portobello Road, is paying tribute to one of the cinema’s greatest enfants terrible, Orson Welles.

The Electric’s season Covers Welles’ last days in Hollywood (MACBETH, LADY FROM SHANGHAI), his early travels (OTHELLO was made in Morocco), his brief return to the system (TOUCH OF EVIL) and the films he made subsequently in Europe.

One film, CONFIDENTIAL REPORT (1955), has disappeared completely, but together with Welles’ portrayal of Harry Lime in THE THIRD MAN, the Electric’s line-up is a healthy tribute to a great individualist of the cinema.

This week’s offerings in the Orson Welles’ Season are LADY FROM SHANGHAI (1947) and CHIMES AT MIDNIGHT (1965).

The evil in the earlier film lurks beneath the surface.

Starring Welles with Rita Hayworth and Everett Sloane, LADY FROM SHANGHAI is loaded with detail, baroque and sumptuous.

Hayworth, the sex symbol of the Forties, plays a deadly praying mantis; Sloane brilliantly portrays her impotent, crippled monster of a husband.

Welles directs and stars again in his own 1965 amalgam of Shakespeare’s “Henry IV”. “Richard II” and “The Merry Wives of Windsor.” And the result – CHIMES AT MIDNIGHT – is a cinematic triumph.

Despite a caste of character and stature, including Sir John Gielgud, Jeanne Moreau, Margaret Rutherfcrd and Keith Baxter, Welles as Falstaff towers over everything as he explores the themes that Shakespeare loved. 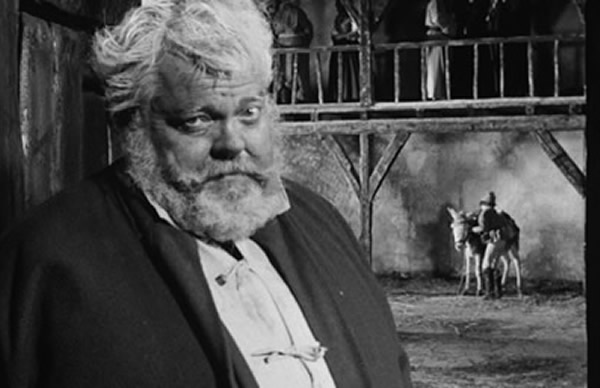