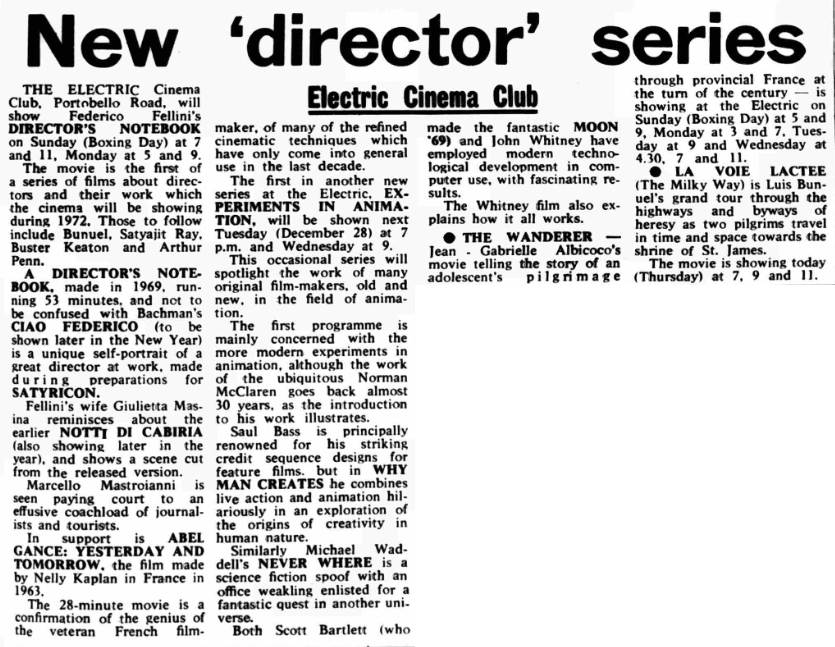 THE ELECTRIC Cinema Club, Portobello Road, will show Federico Fellini’s DIRECTOR’S NOTEBOOK on Sunday (Boxing Day) at 7 and 11. Monday at 5 and 9.

The movie is the first of a series of films about directors and their work which the cinema will be showing during 1972. Those to follow include Bunuel, Satyajit Ray, Buster Keaton and Arthur Penn.

A DIRECTOR’S NOTEBOOK, made in 1969. running 53 minutes. and not to be confused with Bachman’s CIAO FEDERICO (to be shown later in the New Year) is a unique self-portrait of a great director at work, made during preparations for SATYRICON.

Fellini’s wife Giulietta Masina reminisces about the earlier NOTTI DI CABIRIA (also showing later in the year), and shows a scene cut from the released version.

Marcello Mastroianni is seen paying court to an effusive coachload of journalists and tourists.

In support is ABEL GANCE: YESTERDAY AND TOMORROW, the film made by Nally Kaplan in France in 1963.

The 28-minute movie is a confirmation of the genius of the veteran French film-maker, of many of the refined cinematic techniques which have only come into general use in the last decade.

The first in another new series at the Electric, EXPERIMENTS IN ANIMATION, will be shown next Tuesday (December 28) at 7 p.m. and Wednesday at 9.

This occasional series will spotlight the work of many original film-makers, old and new, in the field of animation.

The first programme is mainly concerned with the more modern experiments in animation, although the work of the ubiquitous Norman McClaren goes back almost 30 years, as the introduction to his work illustrates.

Saul Bass is principally renowned for his striking credit sequence designs for feature films, but in WHY MAN CREATES he combines live action and animation hilariously in an exploration of the origins of creativity in human nature.

Similarly Michael Waddell’s NEVER WHERE is a science fiction spoof with an office weakling enlisted for a fantastic quest in another universe.

Both Scott Bartlett (who made the fantastic MOON 9. Monday at 3 and 7. Tues’69) and John Whitney have employed modern technological development in computer use, with fascinating results.

The Whitney film also explains how it all works.

* THE WANDERER – Jean-Gabrielle Albicoco’s movie telling the story of an adolescent’s pilgrimage through provincial France at the turn of the century – is showing at the Electric on Sunday (Boxing Day) at 5 and day at 9 and Wednesday at 4.30, 7 and 11.

* LA VOIE LACTEE (The Milky Way) is Luis Bunuel’s grand tour through the highways and byways of heresy as two pilgrims travel in time and space towards the shrine of St. James.