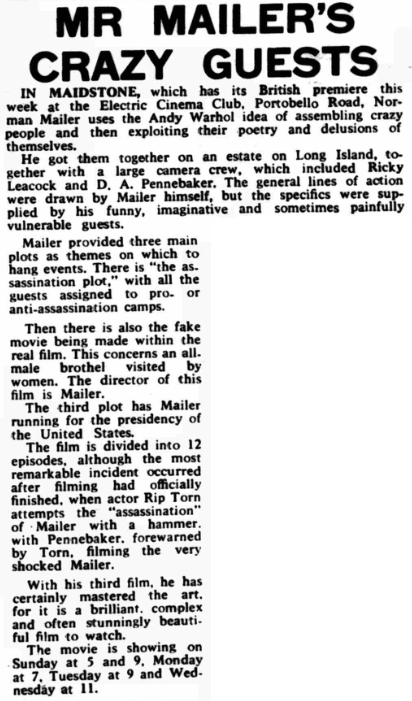 IN MAIDSTONE, which has its British premiere this week at the Electric Cinema Club, Portobello Road, Norman Mailer uses the Andy Warhol idea of assembling crazy people and then exploiting their poetry and delusions of themselves.

He got them together on an estate on Long Island, together with a large camera crew, which included Ricky Leacock and D. A. Pennebaker. The general lines of action were drawn by Mailer himself, but the specifics were supplied by his funny, imaginative and sometimes painfully vulnerable guests.

Mailer provided three main plots as themes on which to hang events. There is “the assassination plot,” with all the guests assigned to pro- or anti-assassination camps.

Then there is also the fake movie being made within the real film. This concerns an all male brothel visited by women. The director of this film is Mailer.

The third plot has Mailer running for the presidency of the United States.

The film is divided into 12 episodes, although the most remarkable incident occurred after filming had officially finished, when actor Rip Torn attempts the “assassination” of Mailer with a hammer, with Pennebaker, forewarned by Torn, filming the very shocked Mailer.

With his third film, he has certainly mastered the art, for it is a brilliant, complex and often stunningly beautiful film to watch.