‘They hand you this program brochure that proclaims “A Great Novel Becomes A Great Motion Picture …” Bullshit.’

Kiss my ass, Hardy. Gene has little time for Frederic Raphael’s and John Schlesinger’s ‘Far From the Madding Crowd‘, which did well commercially at home in the UK but was a famous misfire in the US…

Gene Youngblood, legendary reviewer and cultural theorist who died in April 2021, began a series of film reviews in the LA Free Press in 1967. Many of these reviews formed the basis of parts of his book ‘Expanded Cinema‘ which is now seen widely as a foundational document of post-psychedelic cinema. Blackmass Movies is proud to begin the process of collecting Youngblood’s reviews in one place for the first time. Youngblood’s TV interview with a young George Lucas is here.

I paid $4 to see “Far From the Madding Crowd” at the Fox Wilshire Theater. I walked out half-way through. I haven’t walked out on a film in years; it was a depressing experience.

Leaving that pompous, gold-leafed auditorium and walking alone into the night, I felt like an unrequited lover: I love the movies very much, but they do not love me back; they want only to take my money; they want my body, not my mind. I was sad.

I walked along listening to the metronome clop-clop of my boot-heels on the pavement, thinking how that $4 would have paid for the new Buffalo Springfield album I’m going to buy. And then, inevitably, a blinding montage of movie-critic thoughts flashed through my mind.

I realized, suddenly and with a tinge of regret, that the more I learn about movies the fewer movies I can enjoy. Knowledge is like a pyramid; broader and solid at the base, narrower and precarious at the pinnacle. The higher one climbs up the pyramid of knowledge, the more restricted is one’s range of interest — until everything is focused on that far-away peak of perfection that is the goal and the nemesis of every artist. Like Hemingway’s tiger, frozen on the slopes of Kilimanjaro, you never reach the top. And you start wondering why you’re even trying. And then you die.

To the extent that I function as a movie critic, I function in contradiction to my own idealistic concept of the profession. Here is the reason: I believe a critic should serve only to illuminate and expand public knowledge of a given artistic medium (all criticism, after all, is supposed to be constructive). However, such a critic is only as effective as the works of art being produced. Not having the intuitive foresight of the artist, the critic knows only what he dislikes: he is not aware of what he likes until the artist shows it to him; otherwise the critic himself would be the artist (as sometimes happens.)

The conclusion, therefore, is that the non-artist critic, in order to constructively expand and inform public appreciation of his chosen art, should only give “good” reviews; that is, he should completely ignore films he doesn’t like, because they do not offer sufficient material for illumination of the art. This is the chief difference between the “reviewer” and the critic.

There is, however, a major drawback to this concept: about 90 per cent of the films being produced are not important enough for serious criticism; the critic would end up discussing only about two or three films a year, but the public would continue filling plastic-Gothic edifices like the Fox Wilshire, reacting like Pavlov’s dog to every cheap, sentimental-commericial ploy an arc can project. So, against my better judgment, I write “bad” reviews about movies I don’t like and don’t respect. I think it’s a waste of time, but I care too much about the public image of films to let it pass.

Another thought that struck me just before I walked out on “Far From the Madding Crowd” is how alienated I am from the general consensus of movie goers, the popcorn-munching, cartoon-loving, idol-worshiping status-quo.

As the audience reacted with oohs and aahs and giggles and gasps to each triggering manipulation in the film, I became increasingly aware of an enormous communication gap — which also is a generation gap — that is fundamentally the cause of my cinematic angst. For instance, this movie is loaded with irrelevant, obligatory shots of animals: animals being cute, animals being loyal, animals being cruel. It reminded me of writing for The Herald-Examiner: if the murder victim had a pet dog, mention it in the lead. So there I was blanching at all this base sentimentality while the audience reacted on cue: gasping when a crazed sheepdog urges his flock over a cliff in an utterly meaningless scene; giggling when the camera pauses on a hog’s wet snoot in an equally meaningless barnyard.

Who am I to say people aren’t supposed to enjoy this kind of shallow indulgence? Who am I to say that Frederic Raphael and John Schlesinger and Joseph Janni aren’t supposed to cater to universal yet non-constructive tendencies in a mass audience? I am no one. So I excused myself and sidestepped out of the theater, folding my notebook and capping my penlight with an air of bewildered resignation.

But once outside, in air unsullied by the breath of stale, predictable laughter, I realized my mistake: I was succumbing to the same human temptation to which filmmakers like Schlesinger and critics like Charles Champlin and Bosley Crowther already have surrendered; I was allowing myself to be swayed by public opinion; I was addressing my would-be review to the movie-goers and not to the movies; my concern was not with the art of cinema, as it should be, but rather with the art of audience manipulation. Surely Godard or Brakhage or Antonioni or Welles do not do this when they create. I was ashamed of myself.

Therefore, the following half-review of “Far From the Madding Crowd” represents nothing more or less than one man’s view of cinema, hopefully a responsible and sincere view, offered as a votive effort toward the perpetuation and refinement of the most powerful art form the world ever has known: I can’t bear to see it defiled, yet it is with every screening of this despicable movie, and with every word uttered by the soulless, evil advertising specialists who tell us we ought to spend $4 to see it.

Notes of a cinephile: Electronic media has outmoded the written word, as well as movies based on the written word. “Far From the Madding Crowd” is based not only on literature, but the most dated, stilted literature one could imagine. They hand you this program brochure that proclaims “A Great Novel Becomes A Great Motion Picture…” Bullshit. This film is a throwback to the 30s and beyond — in cinematic technique, in emotional content, in social significance: the unifying factor being that all three are totally absent.

There is a peculiar notion among chic screenwriters that archaic, non-colloquial dialogue (i.e. neo-Shakespearean) automatically connotes profundity, meaning. “Beckett” and “A Man For All Seasons” belong in that bag, along with “Madding Crowd.” But the entire premise is false; it’s a hoax, and you’re conscious of it once you realize that you’re reacting to dialogue specifically designed to elicit a response: that’s not cinema. Word games belong in Pinter plays, or on scrabble boards. Jack Nicholson’s screenplay for “The Trip” contains some of the smoothest, most unpretentious dialogue to be heard in a Hollywood film in years. Yet the ad-men would have a tough time supporting copy like “A Great Trip Becomes A Great Motion Picture…”

According to Mr. Champlin of the Times: “In the anthology of films of surpassing visual majesty and excitement, MGM’s ‘Far From the Madding Crowd’ now takes its place. It joins such varied works as ‘A Man For All Seasons,’ ‘Dr. Zhivago,’ ‘Lawrence of Arabia’…”

With this kind of criticism going on in major newspapers, it’s a miracle that true visual creativity, such as the works of Antonioni, Fellini, Truffaut, Bergman, receive due appreciation. Let’s remember that Schlesinger and his cinematographer, Nicholas Roeg, did not create the locations (“valid and photogenic,” according to the brochure) in the English countryside where the “wonderful pastoral scenes” (helpful brochure again) were photographed. God made these places. Schlesinger and Roeg merely took millions of dollars and the finest 70mm equipment available and shot them. What kind of accomplishment is that? With today’s equipment and unlimited resources, who couldn’t compile a picturesque movie? In fact, it’s a disgrace when a modern-day film is not of “surpassing visual majesty,” because there’s a lot of that in our world.

The only kind of visual artwork to be respected is that in which the artist (or artist-cinematographer) CREATES beauty where none is to be found. Gianni di Venanzo or Raoul Coutard or Stan Brakhage or Subrata Mitra or Carlo di Palma are men whose visual perceptivity adds something to reality; they can elicit from a setting that ambivalent metaphysicalness, that magical “sense of place” that is absent from the shallow calendar art of “Madding Crowd,” “Lawrence,” “Zhivago” and all the rest, including pseudo “art films” like “A Man and A Woman.”

The same applies to the use of “unique” faces in this movie: given time and an army of auditioners, who couldn’t come up with several hundred wizened, weathered or otherwise irregular faces? But who cares? What does it mean? Fellini is the master of this, and with him it means something, because he has an uncanny genius for selecting the face that virtually embodies a given mood or atmosphere. In “Madding Crowd” it’s more like a parade of sideshow freaks for no pertinent effect.

Then there is Schlesinger’s pseudo-arty directorial style. It consists of bleeding every sequence for every forced camera angle possible. For example, there is a scene in which a horse-cart pulls away from an old woman standing in the middle of the road, tearfully waving goodbye. First there is a master shot of the cart and the woman, then a subjective shot, with the camera backing away from the woman, then a reverse-angle longshot of the woman watching the cart vanish in the gathering dusk: that’s really milking a scene for all it’s worth—both cinematically and emotionally, except that the scene isn’t worth it, nor the entire film, for that matter.

I was reminded instantly of a similar sequence in Antonioni’s “Il Grido” — Steve Cochran and his little girl leaving town on the back of a horsecart. A brief but stunning shot with the camera on the car, looking over their shoulders as they gaze at the diminishing horizon. The scene is both visually and thematically effective, since the road has been used in earlier sequences as a symbolic metaphor of emotional alienation.

There also is that matter of “characterization” and “acting.” Here I will say only that midway through the film I could predict everything that was going to happen. I felt I’d seen these characters a thousand times before, heard the same formula dialogue on an endless loop, felt the same dull reaction to the same dull events, ad infinitum. So I left, just when a storm was about to wipe out Julie Christie’s — I mean Bathsheba Everdene’s — sheep ranch. And I really don’t care if it did or not.

This ad appeared on page 22 alongside Gene’s review. 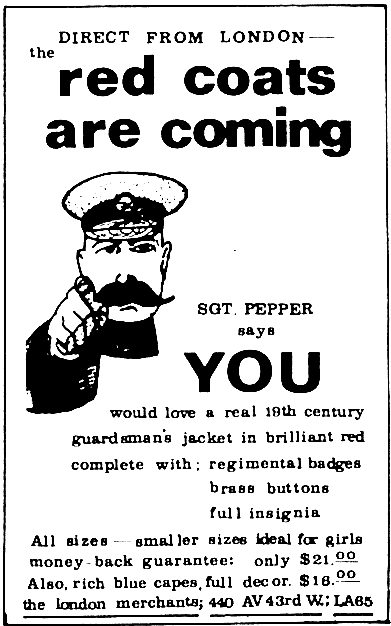