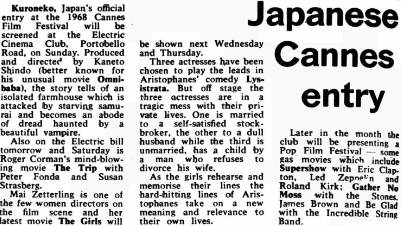 Kuroneko Japan’s official entry at the 1968 Cannes film Festival will be screened at the Electric Cinema Club. Portobello Road. on Sunday. Produced and directed by Kaneto Shindo (better known for his unusual movie Omnibaba) the story tells of an isolated farmhouse which is attacked by starving samurai and becomes an abode of dread haunted by a beautiful vampire.

Also on the Electric bill tomorrow and Saturday is Roger Corman’s mind-blowing movie The Trip with Peter Fonda and Susan Strasberg.

Mai Zetterling is one of the few women directors on the film scene and her latest movie The Girls will be shown next Wednesday and Thursday.

Three actresses have been chosen to play the leads in Aristophanes’ comedy Lysistrata. But off stage the three actresses are in a tragic mess with their private lives. One is married to a self-satisfied stockbroker, the other to a dull husband while the third is unmarried, has a child by a man who refuses to divorce his wife.

As the girls rehearse and memorise their lines the hard-hitting lines of Aristophanes take on a new meaning and relevance to their own lives.

Later in the month the club will be presenting a Pop Film Festival – some gas movies which include Supershow with Eric Clapton, Led Zeplin and Roland Kirk: Gather No Moss with the Stones, James Brown and Be Glad [For The Song Has No Ending] with the Incredible String Band.