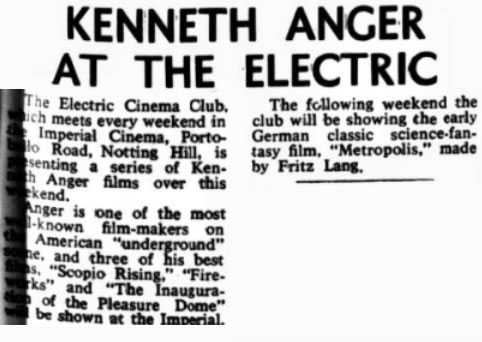 The Electric Cinema Club, which meets every weekend in the Imperial Cinema, Portobello Road, Notting Hill, is presenting a series of Kenneth Anger films over this Weekend.

Anger is one of the most well-known film-makers on the American “underground” scene and three of his best “Scorpio Rising,” “Fireworks” and “The Inauguration of the Pleasure Dome” will be shown at the Imperial.

The following weekend the club will be showing the early German classic science-fantasy film, “Metropolis,” made by Fritz Lang.