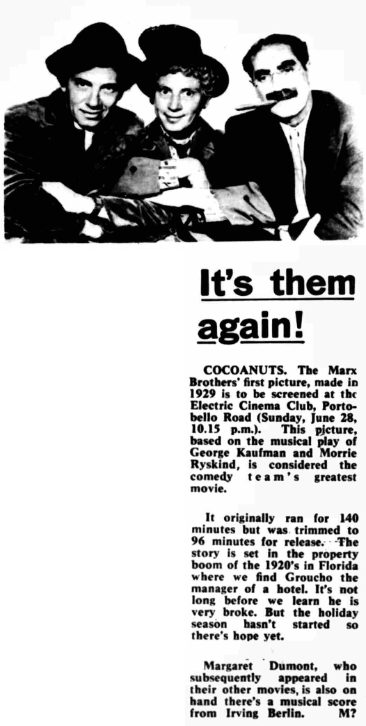 COCOANUTS. The Marx Brothers’ first picture, made in 1929 is to be screened at the Electric Cinema Club. Portobello Road (Sunday, June 28th, 10.15 p.m.). This picture, based on the musical play of George Kaufman and Morrie Ryskind, is considered the comedy team’s greatest movie.

It originally ran for 140 minutes but was trimmed to 96 minutes for release. The story is set in the property boom of the 1920’s in Florida where we find Groucho the manager of a hotel. It’s not long before we learn he is very broke. But the holiday season hasn’t started so there’s hope yet.

Margaret Dumont, who subsequently appeared in their other monies, is also on hand there’s a musical score from Irving Berlin. M?