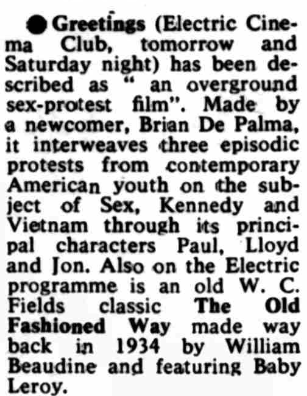 Greetings (Electric Cinema Club, tomorrow and Saturday night) has been described as “an overground sex-protest film”. Made by a newcomer, Brian De Palma, it interweaves three episodic protests from contemporary American youth on the subject of Sex, Kennedy and Vietnam through its principal characters Paul, Lloyd and Jon. Also on the Electric programme is an old W. C. Fields classic The Old Fashioned Way made way back in 1934 by William Beaudine and featuring Baby Leroy.