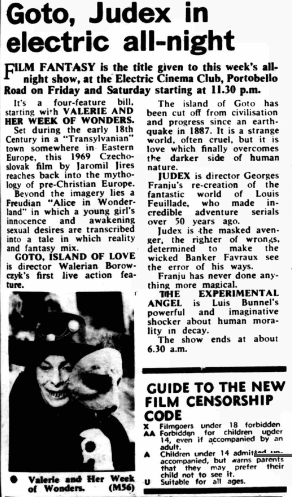 FILM FANTASY is the title given to this week’s all-night show, at the Electric Cinema Club, Portobello Road on Friday and Saturday starting at 11.30 p.m.

It’s a four-feature bill, starting with VALERIE AND HER WEEK OF WONDERS. Set during the early 18th Century in a “Transylvanian” town somewhere in Eastern Europe, this 1969 Czechoslovak film by Jaromil Jires reaches back into the mythology of pre-Christian Europe.

Beyond the imagery lies a Freudian “Alice in Wonderland” in which a young girl’s innocence and awakening sexual desires are transcribed into a talc in which reality and fantasy mix.

The island of Goto has been cut off from civilisation and progress since an earthquake in 1887. It is a strange world, often cruel, but it is love which finally overcomes the darker side of human nature.

JUDEX is director Georges Franju’s re-creation of the fantastic world of Louis Feuillade, who made incredible adventure serials over 50 years ago.

Judex is the masked avenger, the righter of wrongs, determined to make the wicked Banker Favraux see the error of his ways.

THE EXPERIMENTAL ANGEL is Luis Bunnel’s powerful and imaginative shocker about human morality in decay.