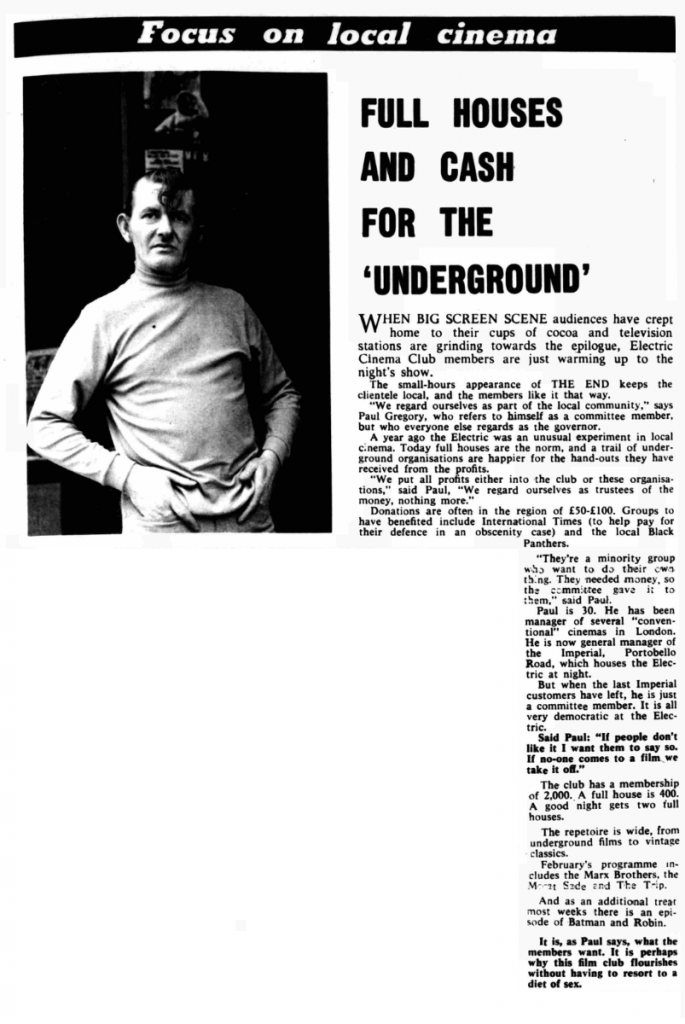 FULL HOUSES AND CASH FOR THE ‘UNDERGROUND’

WHEN BIG SCREEN SCENE audiences have crept home to their cups of cocoa and television stations are grinding towards the epilogue, Electric Cinema Club members are just warming up to the night’s show.

The small-hours appearance of THE END keeps the clientele local, and the members like it that way.

“We regard ourselves as part of the local community,” says Paul Gregory, who refers to himself as a committee member, but who everyone else regards as the governor. A year ago the Electric was an unusual experiment in local cinema. Today full houses are the norm, and a trail of underground organisations are happier for the hand-outs they have received from the profits.

“We put all profits either into the club or these organisations,” said Paul, “We regard ourselves as trustees of the money, nothing more.”

Donations are often in the region of £50-£100 [£750-1500 in 2020 money]. Groups to have benefited include International Times (to help pay for their defence in an obscenity case) and the local Black Panthers.

“They’re a minority group who want to do their own thing. They needed money, so the committee gave it to them,” said Paul.

Paul is 30. He has been manager of several “conventional” cinemas in London. He is now general manager of the Imperial, Portobello Road, which houses the Electric at night. But when the last Imperial customers have left, he is just a committee member. It is all very democratic at the Electric.

Said Paul: “If people don’t like it I want them to say so. If no-one comes to a film we take it off.”

The club has a membership of 2,000. A full house is 400. A good night gets two full houses. The repetoire is wide, from underground films to vintage classics. February’s programme includes the Marx Brothers, Marat Sade and The Trip. And as an additional treat most weeks there is an episode of Batman and Robin. It is, as Paul says, what the members want. It is perhaps why this film club flourishes without having to resort to a diet of sex.

‘There was this cinema on the Portobello Road, the Electric Cinema, and it was the oldest cinema in England, the first to show movies. It was owned by some strange old man who lived up in Edgware and was managed by a man called Paul who looked like Bill Haley and was only about 4’3” and put margarine in his hair. It was taken over by John McWilliams. He was renting films from various places […] a mixture of classics like stuff by Cocteau, Buster Keaton, ‘Metropolis’, plus modern underground things like ‘Pull My Daisy’, abstract movies… it was packed. Huge crowds. It cost a shilling to get in, later it went up to four shillings. The place used to fall to bits, it had old-fashioned steam heat and every now and then a piece of the ceiling used to fall on the seats and they’d collapse, but it was a safe haven for hippies. The ethos of the place was “We are the community.”

The Electric Cinema at one time was the major fund-raising organisation in the underground. I mean everybody needed money and got it from the Electric.’]