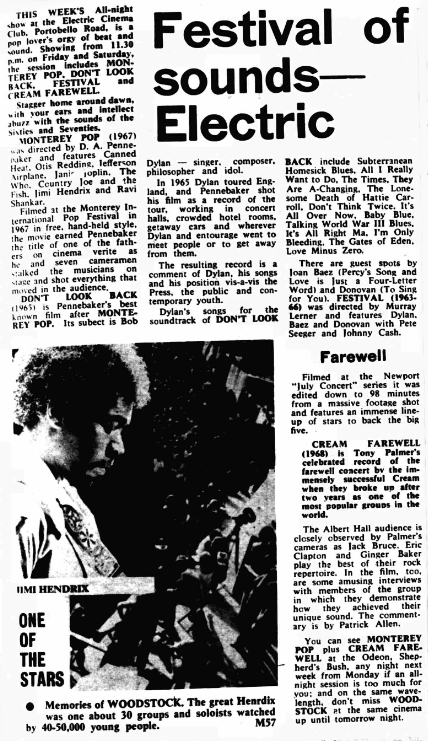 Stagger home around dawn, with your ears and intellect abuzz with the sounds of the Sixties and Seventies.

MONTEREY POP (1967) was directed by D. A. Pennebaker and features Canned Heat, Otis Redding, Jefferson Airplane, Janis Joplin. The Who, Country Joe and the Fish, Jimi Hendrix and Ravi Shankar.

Filmed at the Monterey International Pop Festival in 1967 in free, hand-held style, the movie earned Pennebaker the title of one of the fathers on cinema verite as he and seven cameramen stalked the musicians on stage and shot everything that moved in the audience.

In 1965 Dylan toured England, and Pennebaker shot his film as a record of the tour, working in concert halls, crowded hotel rooms, getaway cars and wherever Dylan and entourage went to meet people or to get away from them.

The resulting record is a comment of Dylan, his songs and his position vis-a-vis the Press, the public and contemporary youth.

Dylan’s songs for the soundtrack of DON’T LOOK BACK include Subterranean Homesick Blues, All I Really Want to Do, The Times, They Are A-Changing, The Lonesome Death of Hattie Carroll, Don’t Think Twice, It’s All Over Now, Baby Blue, Talking World War III Blues, It’s All Right Ma, I’m Only Bleeding, The Gates of Eden, Love Minus Zero.

There are guest spots by Joan Baez (Percy’s Song and Love is Just a Four-Letter Word) and Donovan (To Sing for You). FESTIVAL (1963 – 66) was directed by Murray Lerner and features Dylan, Baez and Donovan with Pete Seeger and Johnny Cash.

Filmed at the Newport “July Concert” series it was edited down to 98 minutes from a massive footage shot and features an immense lineup of stars to back the big five.

CREAM FAREWELL (1968) is Tony Palmer’s celebrated record of the farewell concert by the immensely successful Cream when they broke up after two years as one of the most popular groups in the world.

The Albert Hall audience is closely observed by Palmer’s cameras as Jack Bruce, Eric Clapton and Ginger Baker play the best of their rock repertoire. In the film, too, are some amusing interviews with members of the group in which they demonstrate how they achieved their unique sound. The commentary is by Patrick Allen.

You can see MONTEREY POP plus CREAM FAREWELL at the Odeon, Shepherd’s Bush, any night next week from Monday if an all-night session is too much for you: and on the same wavelength, don’t miss WOODSTOCK at the same cinema up until tomorrow night.