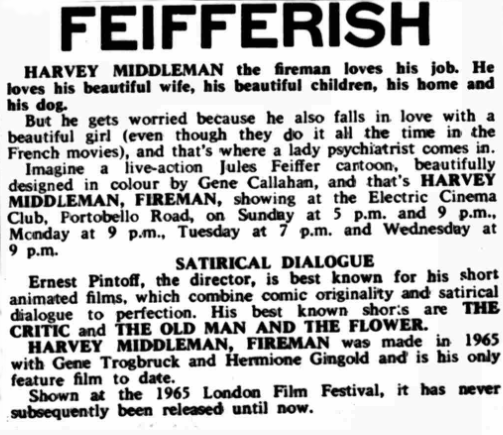 But he gets worried because he also falls in love with a beautiful girl (even though they do it all the time in the French movies), and that’s where a lady psychiatrist comes in.

Imagine a live-action Jules Feiffer cartoon, beautifully designed in colour by Gene Callahan, and that’s HARVEY MIDDLEMAN, FIREMAN, showing at the Electric Cinema Club, Portobello Road, on Sunday at 5 p.m. and 9 p.m., Monday at 9 p.m., Tuesday at 7 p.m. and Wednesday at 9 p.m.

Ernest Pintoff, the director, is best known for his short animated films, which combine comic originality and satirical dialogue to perfection. His best known shorts are THE CRITIC and THE OLD MAN AND THE FLOWER. HARVEY MIDDLEMAN, FIREMAN was made in 1965 with Gene Trogbruck and Hermione Gingold and is his only feature film to date. Shown at the 1965 London Film Festival, it has never subsequently been released until now.