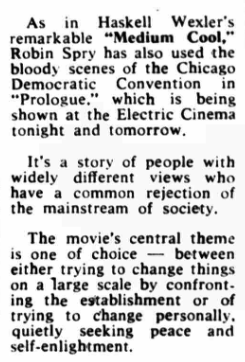 As in Haskell Wexler’s remarkable “Medium Cool,” Robin Spry has also used the bloody scenes of the Chicago Democratic Convention in “Prologue,” which is being shown at the Electric Cinema tonight and tomorrow.

It’s a story of people with widely-different views who have a common rejection of the mainstream of society. The movie’s central theme is one of choice – between either trying to change things on a large scale by confronting the establishment or of trying to change personally, quietly seeking peace and self-enlightment.