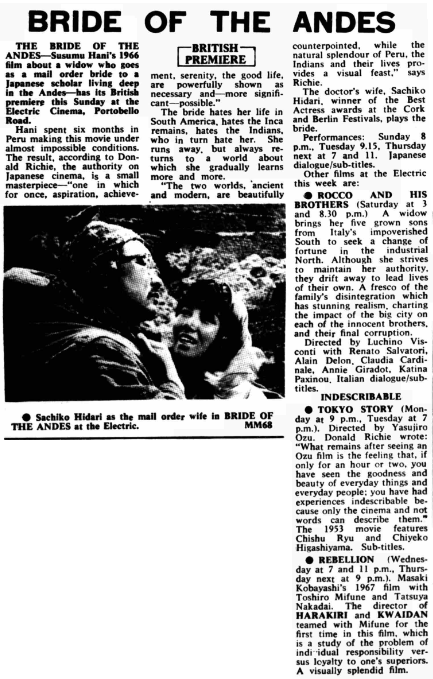 BRIDE OF THE ANDES – Sasumu Hani’s 1966 film about a widow who goes as a mail order bride to a Japanese scholar living deep in the Andes — has its British premiere this Sunday at the Electric Cinema, Portobello Road.

Hani spent six months in Peru making this movie under almost impossible conditions. The result. according to Donald Richie, the authority on Japanese cinema, is a small masterpiece — “one in which for once, aspiration, achievement, serenity, the good life, are powerfully shown as necessary and – more significantly – possible.”

The bride hates her life in South America, hates the Inca remains, hates the Indians, who in turn hate her. She runs away, but always returns to a world about which she gradually learns more and more.

“The two worlds, ancient and modern, are beautifully counterpointed, while the natural splendour of Peru, the Indians and their lives provides a visual feast,” says Richie.

The doctor’s wife, Sachiko Hidari, winner of the Best Actress awards at the Cork and Berlin Festivals, plays the bride.

Performances: Sunday 8 p.m. Tuesday 9.15, Thursday next at 7 and 11. Japanese dialogue/sub-titles.

Other films at the Electric this week are:

* ROCCO AND HIS BROTHERS (Saturday at 3 and 8.30 p.m.) A widow brings her five grown sons from Italy’s impoverished South to seek a change of fortune in the industrial North. Although she strives to maintain her authority, they drift away to lead lives of their own. A fresco of the family’s disintegration which has stunning realism, charting the impact of the big city on each of the innocent brothers, and their final corruption.

* TOKYO STORY (Monday at 9 p.m., Tuesday at 7 p.m.). Directed by Yasujiro Ozu. Donald Richie wrote: “What remains after seeing an Ozu film is the feeling that, if only for an hour or two, you have seen the goodness and beauty of everyday things and everyday people: you have had experiences indescribable because only the cinema and not words can describe them.” The 1953 movie features Chishu Ryu and Chiyeko Higashiyama. Sub-titles.

* REBELLION (Wednesday at 7 and 11 p.m., Thursday next at 9 p.m.). Masaki Kobayashi’s 1967 film with Toshiro Mifune and Tatsuya Nakadai. The director of HARAKIRI and KWAIDAN teamed with Mifune for the first time in this film, which is a study of the problem of individual responsibility versus loyalty to one’s superiors. A visually splendid film. 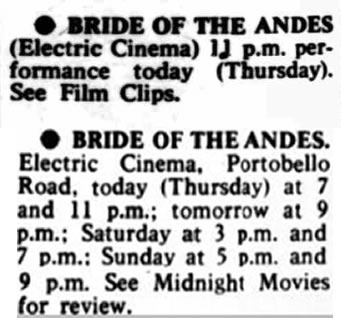