It says something about the state of the cinema that a new film, Duffer, is having its premier next Sunday not in a West End cinema packed with celebrities but in the Portobello-road of all places. It will go on at the splendidly named Electric Cinema Club, London’s second oldest purpose-built cinema, put up around 1912.

The idea is not quite so off-beat as it sounds because much of the film was shot around the seedier parts of Notting Hill Gate.

It deals with the relationship between an adolescent boy and older man and a prostitute. It was made by two Canadians long resident in London, Joseph Despins and William Dumaresq, and has a musical score by Galt McDermot, who wrote the music for Hair. 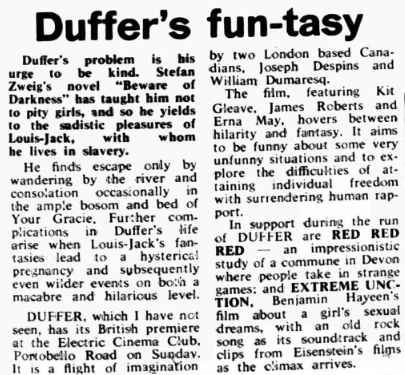 Duffer’s problem is his urge to be kind. Stefan Zweig’s novel “Beware of Darkness” has taught him not to pity girls, and so he yields to the sadistic pleasures of Louis-Jack, with whom he lives in slavery.

He finds escape only by wandering by the river and consolation occasionally in the ample bosom and bed of Your Gracie. Further complications in Duffer’s life arise when Louis-Jack’s fantasies lead to a hysterical pregnancy and subsequently even wilder events on both a macabre and hilarious level. DUFFER, which I have not seen, has its British premiere at the Electric Cinema Club, Portobello Reed on Sunday. It is a flight of imagination by two London based Canadians, Joseph Despins and William Dumaresq.

The film, featuring Kit Gleave, James Roberts and Erna May, hovers between hilarity and fantasy. It aims to be funny about some very unfunny situations and to explore the difficulties of attaining individual freedom with surrendering human rapport.

In support during the run of DUFFER are RED RED RED an impressionistic study of a commune in Devon where people take in strange games: and EXTREME UNCTION, Benjamin Hayeen’s film about a girl’s sexual dreams, with an old rock song as its soundtrack and dips from Eisenstein’s films as the climax arrives.

A British feature film made by two Canadians long resident in London, where, for the best part of ten years, they have been active in theatre, music and movies. The film defies categories and is partly innovatory in the areas of script, camerawork and music track.

Joseph Despins and William Dumaresque shot their film mainly in the seedier parts of Notting Hill Gate, and it was fitting that it should be given its premiere in this area. Music for the film was specially composed by Galt McDermot. Dumaresque and Despins are currently shooting their next feature, a musical drama WHO THE MURDERER WAS, again with a score by McDermot.

Plus RED RED RED. An impressionistic study of a commune.

And EXTREME UNCTION. About a girl’s sexual dreams with an old rock song as its soundtrack. 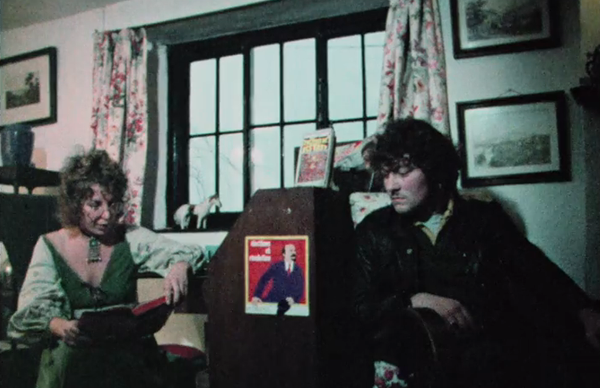