The Electric’s August 1971 season of Vincent Price films for Roger Corman wasn’t the first time that Price and Portobello Road were linked.

A set of images – most of which are from vincentpricelegacy.uk – show Vincent and his co-star Jane Asher shopping for paintings and antiques in Notting Hill, the two actors taking a break from filming Corman’s ‘Masque of the Red Death’ at Elstree Studios in November 1963.


Portobello was, in 1963, more like the west London street market seen in this footage from 1954 than the swinging version it was a few years later, reported in the pages of ‘Rave’ magazine in December 1966 (below). As was so often the case, Vincent Price was hanging around Notting Hill with Jane Asher long before it became cool. Depending on how far up Portobello Road they wandered, it’s entirely possible Price stood outside the tatty Imperial cinema (it wouldn’t be renamed the Electric till the club took over seven years later).

An advertisement for ‘Secondhand City’ – “The largest stock of secondhand and antique furniture in London ” – on the same page Mary Lear’s preview of the Corman/Price season at the Electric illustrates how closely the market and cinema coexisted. 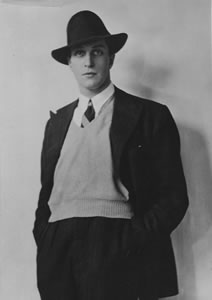 Price had studied Art History at Yale and at London’s Courtauld Institute of Art in 1935, and before that had been a precocious collector as a young man in St Louis, Missouri. In 1962 he launched the Vincent Prince Collection through the Sears-Roebuck catalogue, which offered the general public the opportunity to own original art work which they could pay for by installments in the same way they may pay for their furniture or television. Until it ended in the same year as the Electric’s Price/Corman festival in 1971, the Vincent Price Collection sold 50 000 works including some by Rembrandt, Picasso, and Salvador Dalí.

Always a trend setter, Price was an Influencer – using his brand to promote high culture, affordable to the masses – forty eight years before Instagram was a thing. His remarks in the film linked below about making Art available to everyone regardless of their background are especially poignant, given Price’s philanthropy. In 1957 he donated part of his collection to East Los Angeles College, “one of the very few community colleges in the U.S. with a major art collection.”

In 1999 The Simpson’s gently sent up his collaboration with Sears-Roebuck, as well as his 1975 ‘Shrunken Head Apple Sculpture’ endorsement and role as Egghead in the Adam West ‘Batman’ TV show.

Price was back at Elstree to film both ‘The Abominable Dr Phibes’ and ‘Dr. Phibes Rises Again’ between 1970 – 1972, and in 1972 to film ‘Theatre of Blood’, where the ‘Burbage Theatre’ was filmed at Putney Hippodrome across the River Thames.

Along with Price’s long connection to London’s Art world, there was a specific attraction for Price the avid collector to Kensington & Chelsea, a much earlier association of the area with bohemians and hedonists. Chelsea was famously home to the expatriate American painter James Abbott McNeill Whistler. Whistler’s ‘Nocturne in Black and Gold – The Falling Rocket‘ [below, right] is a painting of the fireworks display at Cremorne Gardens in the 1870s. The pleasure gardens were at the toe of Chelsea’s working class ‘World’s End’ area, strongly associated with sex work which was aided by the gas-lit paths through the gardens which were open till early in the morning.

A print collector recalls visiting the Vincent Price Collection gallery in Chicago in 1969:

I lived … near the Sears Roebuck Vincent Price Gallery which was a pleasurable walk from my apt. I visited there several times to browse and once when I was visiting, whom should I meet but the man himself. I struck up a conversation and found Mr. Price to be a warm, genial, personable and delightfully engaging gentleman who was completely opposite from the characters he played in horror movies. I told him of my interest in prints and he inquired as to what I was “searching for” and I said “something by Whistler that is looking into a doorway.” He said “I think I might have what you want and I’ll bring it in for you”. Long story… short….he sold me “La Vielle aux Loques” [below, left] which was exactly the type of Whistler doorway that I wanted and I recall he indicated that he held another in his personal collection of the same or possibly earlier of the three states and in the same exceptional condition as the one he sold me. I bought it for a ridiculously low price maybe $250 and that print remains in my collection as a treasure with a special memory … I thought you might appreciate the brief story about Mr. Price who sadly is a treasured memory now and MY special Whistler.